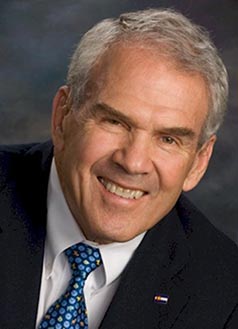 Chairman of the Board

Steve Schuck’s career resume reads more like an adventure, a mission to succeed and to lead. It began with a Bachelor’s degree in economics from the Wharton School of the University of Pennsylvania. Following graduation, he became a math teacher and head football coach at the Manlius School, then a prep school for West Point. After two years with a manufacturer in New York City, he and his wife, Joyce, a published author, headed to Colorado Springs in 1961. They have three children, six granddaughters, two grandsons, four great granddaughters, and one great grandson.

Schuck Communities, now Schuck Chapman Companies, founded by Steve Schuck over 50 years ago, continues to be a major developer of commercial, residential, industrial and mixed-use projects in multiple markets.

Schuck has, or had, more than 50 joint ventures and partnerships, creating and developing more than 5,000 residential home sites and 10,000 acres of commercial projects in the Denver, Colorado Springs, Portland, and Phoenix markets, valued in the billions of dollars.

Schuck has been named “Citizen of the Year” by the Colorado Springs Chamber of Commerce, the Colorado Association of Homebuilders, the Urban League, the Board of Realtors, the El Paso County Republican Party, and has received a medal of merit from the University of Colorado Board of Regents, Step 13’s first award of leadership, the David S. D’Evelyn Award for Inspired Leadership from the Independence Institute, the YMCA’s Woodgate Award and the National Center for Neighborhood Enterprise’s Achievement Against the Odds “Pharaoh” Award and, with Joyce, was chairperson of the Easter Seals Telethon, the March of Dimes Mothers March, and received the Lions Heart Award from CSCS, as well as the 2021 Leadership Program of the Rockies Legacy Award. Gov. Owens proclaimed Oct. 15, 2004 as Steve Schuck Day.

Presently his focus is on improving public policy, at the local, state, and national levels,so that all parents, regardless of their circumstances, are empowered to choose the education they think is best for their children. And he and Joyce backed up their commitment to education by creating Parents Challenge, which has empowered the low-income parents of more than 2,500 disadvantaged kids with privately funded scholarships, grants, and mentoring that can be used in both public and private schools.

Steve Schuck is driven by his passionate belief that “Everyone will benefit when business entrepreneurs apply their real-world experience and talent, developed in the competitive marketplace, to society’s challenges.”

So he took his thoughts on improving government even a step further by becoming a candidate for the Republican nomination for Governor of Colorado in 1986, hoping to apply his community and business leadership to the challenges facing his State. He lost by fewer than 3,000 votes, but made, and still makes, important contributions to the political and public policy landscape. He was endorsed by the Denver Post, which praised his “restless energy, driving intelligence, infectious humor and contagious need to do something.”